Don’t miss today’s Teaser Tuesday from The Society by Jodie Andrefski, which releases on Tuesday, May 3, 2016!

“What the hell is this?” His shocked voice startled me.

I glanced over my shoulder.

Jeremy sat up straight on the bed, my spiral notebook open on his lap. I spun around and jumped up so quickly that I tripped on the chair legs and almost went flying. I dove toward him.

“What do you think you’re doing? That’s private!” I reached over to grab the notebook away from him, but he moved faster.

He strode over to his bedroom door and shut it, then turned back to me, holding the notebook out like it was something dirty.

“It was on the bed. I thought it was your poetry, which you always let me read.” He shook his head, face still in shock. “Sam, what is this?”

I knew I wouldn’t be able to wrestle the notebook from him without making noise that might attract his parents’ attention. So instead I sat on the bed, arms crossed in front of me, glaring. I didn’t say a word. I didn’t owe him an explanation, and obviously he wouldn’t understand given his horrified reaction.

He wagged the notebook at me. “Are you seriously planning to do this?” He took a step toward me. “Please tell me you aren’t.”

I closed my eyes for a moment, trying to decide how much to tell him. I hadn’t wanted him to be involved. When I opened my eyes, he stood stock still a few feet away from me. The notebook was lowered now, resting against his thigh. I raised my eyes to meet his. Instead of the judgment I thought I’d seen moments ago, I saw concern.

I sighed. “It’s nothing. Please give it back.” My hand reached out, and my eyes begged him to do it. Instead, he rolled it in half and stuck it behind his back into the waistband of his jeans.

“Not until you tell me what’s going on.” His jaw set, and I recognized the look in his eyes. Jeremy could be stubborn when he wanted.

He raised an eyebrow, waiting. He was smart enough not to move closer, probably figuring I’d have no qualms about going for the notebook, down his pants or not.

I exhaled a deep breath. “I’m sick of it, Jer. I’m sick of how Jessica constantly feels the need to humiliate me in public. It’s always something.” I paused.

He watched me, listening, not saying a word.

I shook my head. “You don’t know what it’s like. I mean, ever since my dad went to prison, it’s been hell at school every single day. It’s like she forgets that she was the one who eavesdropped on my dad’s phone calls to report back to her father, and helped put my dad there. Do you know she never once even apologized? We were supposed to be best friends and she did that to me. Did that to my family!”

I brushed an angry tear away.

His expression softened a little, but he still didn’t make a move toward me.

“She won’t let it go. I mean, I get that she blames my dad for her parents’ divorce, but that wasn’t my fault. And at least she still gets to see both of her parents. They’re both still in town.” I paused. “It’s like it’s her life’s goal to make sure I know I don’t belong. To make sure everyone knows I’m trash. That I’m nothing but the daughter of some convict.”

My voice got louder. “But you know what? I know that. I live it. I’ve lost everything that matters.”

He never broke eye contact, and when he answered, his voice was gentle. “You haven’t lost me.”

But I didn’t want gentle. I didn’t want soothing. I needed him angry for me…to agree with me. I jumped up and stalked toward him. His hands moved behind his back as though to block any sudden movements on my part. But by now, I didn’t care about the stupid notebook.

“If you tell me I just have to ignore her, I swear to God I’ll scream.” 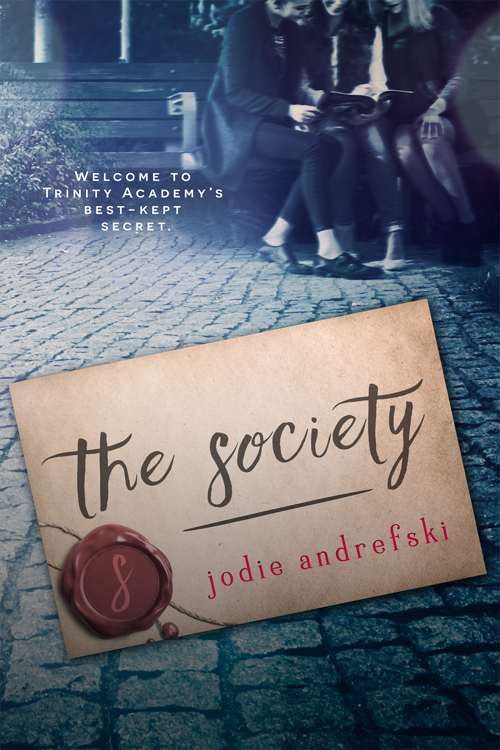 You’ve been handpicked by the elite of the elite to become a member. But first you’ll have to prove your worth by making it through Hell Week.

Do you have what it takes?

It’s time to find out.

Samantha Evans knows she’d never get an invite to rush the Society—not after her dad went to jail for insider trading. But after years of relentless bullying at the hands of the Society’s queen bee, Jessica, she’s ready to take down Jessica and the Society one peg at a time from the inside out.

All it’ll take is a bit of computer hacking, a few fake invitations, some eager rushees…and Sam will get her revenge.

Happy Book Birthday to Pieces of You and Me & Crazy, Stupid, Fauxmance!

If you love contemporary YA romances, then these three YA novels will be right up your alley!  On sa…