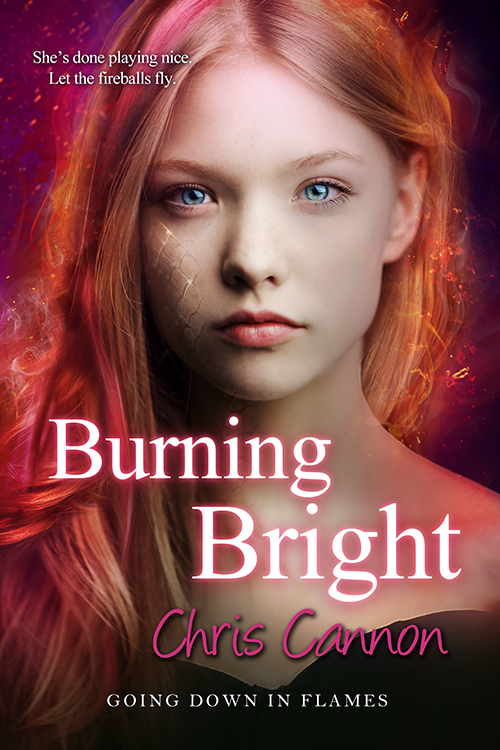 Welcome to Swoon Sunday where you get to meet some of our swoon-worthy heroes.  Today we have a visit from Jaxon Westgate from Burning Bright by Chris Cannon. 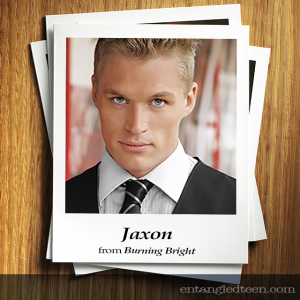 Like all Blue dragons I have golden tan skin, blond hair, and blue eyes. Some might say my eyes are piercing. Bryn accuses me of being pretty, but that doesn’t sound very masculine so I’m not sure if she means it as a compliment or an insult. We have a complicated relationship.

Westgate Estate is in the forest surrounding the Institute for Excellence. I can’t tell you the location of my home or school because it is a secret society of shape-shifting dragons. I’m sure you understand.

I can outfly anyone except Bryn. I’m a fierce fighter in both dragon and human form.

I used to believe that the Directorate, and my father were infallible. Now I know that’s not true. It’s disturbing and it’s Bryn’s fault as are most of the annoying things in my life.

I enjoy reading, and not talking to people while I read. So I’ve been taking milk and cookies to Bryn’s room. We each read our own books and enjoy the cookies and milk in silence. No useless conversation is required.

Flying. When I’m in dragon form soaring through the sky life is so much simpler. It feels like I’m free to do what I want. It’s only when I come back down to earth and shift to human form that I feel trapped by circumstance.

Chunky peanut butter is an abomination.

Aragon from Lord of the Rings.

Seriously? Who thinks up these questions?

Liked this interview with Jaxon? Then check out a swoony moment between he and Bryn:

Nothing strange or mortifying happened on Monday or Tuesday. Wednesday was odd because Jaxon knocked on her door after dinner, interrupting her reading. He held his own book and had a takeout box with two cups and a couple of giant cookies, which looked like they were chocolate chip.

“What’s this?” Bryn asked as she let him in.

“A reading date,” Jaxon said. “To appease the people who are making snide remarks about our non-relationship.”

“People are talking about us? Since when?”

He set the box on the coffee table and sat in one of her wing-backed chairs. “Doesn’t matter. One night a week we can meet to read and that should shut people up.”

“Okay.” She plopped back down on the couch with her book and then eyed the cups he’d brought. She couldn’t smell anything so he hadn’t brought coffee.

“It’s milk,” he said without looking up from his book.

She grabbed a cup and took the lid off, broke off a piece of cookie, and dunked it before taking a bite. It was brown sugar, vanilla, and chocolate bliss. This type of dating totally worked for her.
She read and finished off her cookie before eyeing up the cookie still sitting in the box. Jaxon was deep into whatever he was reading. He hadn’t touched his cookie, so maybe he wouldn’t miss it.

She started to lean forward and he said, “Don’t even think about it.”

“You’re not eating it,” she objected.

“One,” she said. “It’s like you don’t even know me.”
He shook his head and continued reading. Ten minutes later he closed his book and picked up his cookie. She gave him puppy dog eyes.

“Fine.” He broke a third of the cookie off and gave it to her.

After finishing his cookie, he shoved his cup back into the carryout box. “Are you done with your milk?” he asked.

He shoved her cup back into the container and stood. “I’m at a good stopping point in my book, so I’ll see you tomorrow.”

“Are we still eating dinner together tomorrow, because we could read together several nights a week instead.” Would he go for her plan?

“We still need to be seen together in public. What if I eat dinner at your table one night a week? Then I won’t have to explain your lack of manners to my friends.”

“You just couldn’t play nice the entire time, could you?”

“I am a Westgate,” he said with a fake air of snottiness.

He smiled at her, and it was a real smile. That was nice.

“Good night, Bryn.” He walked to the door and let himself out. Weird how she’d never thought he’d act so normal. He was usually so formal and Blue. Maybe this whole friendship thing could work. 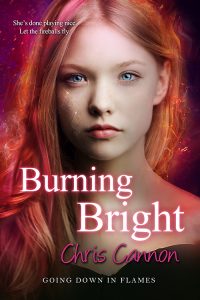 Chris Cannon is the award-winning author of the Going Down In Flames series and the Boyfriend Chronicles. She lives in Southern Illinois with her husband and several furry beasts.

Bring Me Their Hearts Giveaway!

Bring Me Their Hearts Tour & Giveaway!

I have a teensy fixation with Halloween. I start decorating in September (because it takes that long…

We are excited to have A.M. Rose with us today chatting about Younger – A show for book lovers and w…