By the time we put the fake dagger down, I was sweating and out of breath. Who knew self-defense could be so much work?

With a sigh, I collapsed in the shade under a big oak tree and sprawled out. Gareth sat down beside me, then rolled over until he was propped above me. “Is this another self-defense lesson?” I laughed.

He gave me a cocky grin. “Hmm…it can be. Because what will you do if someone gets you pinned to the ground?”

My hands moved up his chest until my arms circled his neck. “Maybe something like this.”

I tugged him down on top of me, letting my mouth cover his. I parted his lips with mine, letting my tongue move against his. He groaned, pinning my arms above my head so he could trail kisses down my neck then back up again. Using my hips, I thrust him up enough for me to roll him over onto his back. I grabbed the stick we’d been using and held it to his neck.

“I do believe I’ve won, Gareth of Summer.”

His hands rested on my waist; my dress pushed up to my upper thighs. “And if this is the way I get to die, you can best me every time. However, may I ask that you not do this move on anyone but me?”

“Why? Jealous?” I dropped the stick, this time pinning his arms above his head. 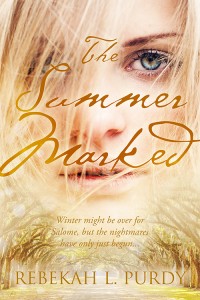 About The Summer Marked:

Salome left humankind behind to be with her boyfriend, Gareth, in the Kingdom of Summer. But now forces of darkness are rising. Her happily-ever-after is coming apart, and the Kingdom is on the brink of war.

Newly-single Kadie Byers is on her way home for Thanksgiving, imagining a visit filled with hot chocolate, a hot guy for a little rebound action, and some girl time with her bestie, Salome. Except she receives a message from Salome with two important words: PLEASE HURRY.

When Kadie rushes to help Salome, she’s ripped from the human world and pulled into the kingdoms of Faerie, where she’s shocked to learn that Salome’s monsters are real, and that she’s now at the mercy of one extremely vengeful Winter Queen…

Now both Salome and Kadie must find a way to survive the deadly chaos…or lose themselves to Winter’s deadly, icy grasp.

Posted in: Around the Web, Rebekah Purdy, Stuff We Love
Previous

Let us know what you think of the cover for Why I Loathe Sterling Lane by Ingrid Paulson, which rele…