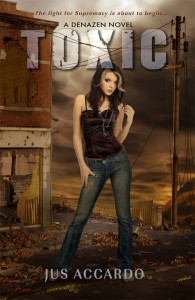 Jus Accardo is a Six. Yeah, she has super powers. (If you haven’t yet read Touch, a SIX is a teen with a genetic difference—one that gives them really cool powers like dream-walking, or healing powers, or the ability to change matter into the cool shoes you saw at the mall). For the record, I think Jus has more than one power (and there’s a coffee connection, but I haven’t figured that out yet), but the strongest power I have seen her exhibit is her ability to grab a reader and push her through the book without letting her stop to take a breath or even do Calculus homework.

Her latest release in the Denazen series, Toxic, was a no-brainer when it came to acquisition. Like Touch, the characters are people we know—except they have uber cool powers and monumental life or death problems. How do you outrun an organization that is bent on killing you (run by your father, no less), finish high school, and keep your boyfriend away from Miss Evil Prom Queen? And let’s not forget, you are dying during all this. And there isn’t a cure. Or is there? Oh, and let’s not forget Kale. Need I say more than his name? Yeah, he is the perfect YA hero.

We’ve acquired several of Jus’s books (Faceless, a Denazen novella, releases in November) because she is a fabulous writer who can keep the reader turning pages. Jus doesn’t shy away from issues teens face—and to me, that is a huge plus. You aren’t going to have gratuitous sex, drugs, or even Rock ‘n Roll in her books, but she does address issues head-on.

Lastly, Jus is a hard worker. As an editor, there is nothing more refreshing that feeling like you have a partnership with the author. You are both working toward the same goal—deliver the best and most exciting product to the reader. I don’t know how Jus produces so much quality writing in the short time she does, but because she is so prolific, and we love her, you’ll see a lot more of her books on the Entangled bookshelf in the upcoming year.

So if you see Jus at a book signing or convention, pay close attention. See if you can spot her other powers. In the meantime, I dare you to pick up one of her books and see if you can set it down while reading. I couldn’t.

Stuff We Love, by Lisa Burstein

Around the Web, by Lea Nolan

Inside the Acquisitions Boardroom: Stacy Cantor Abrams on Sara Wolf’s Remember Me Forever   One…