Belinda stood shivering at the back of the bowl-like amphitheater, waiting for sunrise to make her grand entrance. Ellona had already gone ahead to take her seat—leaving Belinda alone with her cold feet.

Literal cold feet as well as metaphorical. Actually—she shivered—she had cold fingers and arms and a cold nose, too, because her wonderful dress was a tad skimpy, and the outdoors in late spring was chilly.

Where was her dad? Belinda bit her lip. He had to be here. This wasn’t like missing a birthday.

He was supposed to escort her down the aisle.

But he didn’t come, and the sky turned pink behind her, and the processional music swelled.

She forced her slippered feet into action, pinned a smile to her face, and, as coached by Ellona, kept her shoulders back as she walked slowly down the center aisle, between the rings of benches. She pretended that all those eyes on her didn’t make her skin crawl.

All those strangers. Any one of whom could be Malachi.

She was supposed to look straight ahead, but she searched the crowd compulsively, trying to identify any threats.

Juliet stood up and waved, defiantly. Instead of being seated near the inner ring of witnesses, Ellona had placed her mother and her second husband, Hal, about ten rows up. Belinda waved back.

A murmur went through the crowd. “Juliet…”

“…not from a First Family…”

Was that why her father had stayed away? To prevent gossip?

The amphitheater was open to the sky, and a breeze swirled around Belinda’s ear, making her shiver. “Belinda?” the breeze asked.

Belinda relaxed. Only one person would contact her via an air spirit—Demian. Anyone else would have used a genie. But Demian had a rare condition that meant he couldn’t undergo the neural implants necessary for a genie. “Demian! Where are you?” she whispered, her stiff smile turning genuine.

Since she also had the long-winded talent, the breeze carried her words back to him. It was fortunate that her talent matched his. Having four otherselves didn’t mean having all of the four magical talents—long-winded, hot-blooded, silver-tongued, stone-hearted, one talent for each element and each Mirror World. In fact, she only had one, long-windedness, which allowed her to speak to air elementals.

The breeze carried his answer back after only a short lag: “On your left, seventh row.”

Belinda searched the sea of guests but couldn’t spot her friend’s face. The sheer number of people filling the large amphitheater gave her a jittery feeling in her stomach. There must be close to a thousand people here, most of them strangers. When two First Families joined, as they did today, everyone who was anyone attended.

“I don’t like this guy you’re being Bonded to. He looks about as intelligent as a block of marble. His neck is the size of my waist.”

Warren was waiting for her in the center of the circular arena. He looked handsome in a formal frock coat and knee breeches in his family colors, dark blue with gold piping. Belinda studied him critically. Demian was right: Warren’s neck was a bit thick.

Her steps became slower and slower as she went down the steps to join Warren.

A choking sense of dread blocked her throat. Malachi would make his move soon. 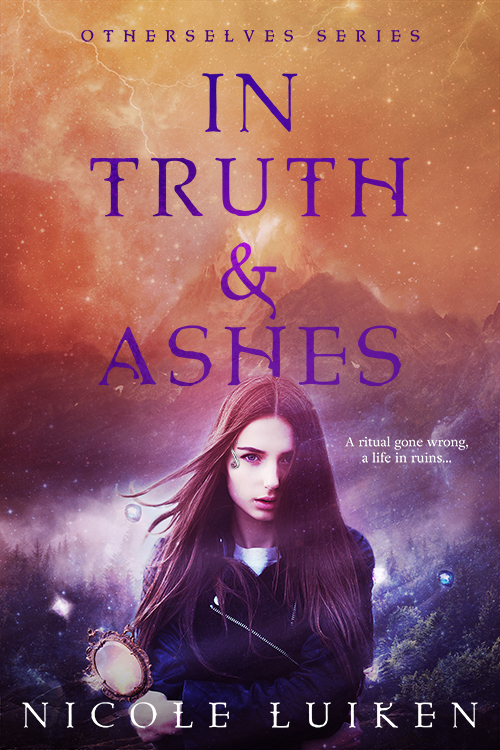 About In Truth & Ashes:

What she can’t remember could ruin her life.

The Mirror Worlds are but dull reflections of the True World, where magic and technology blend together…

On the True World, Belinda Loring has known from childhood that she must Bond with the son of another noble First Family. Uniting the families ensures hers will hold onto its powerful position, and so she’s always pushed down the tender feelings she has for her best friend—gorgeous, steadfast Demian, who isn’t noble.

But when the ceremonial magic goes disastrously wrong, Belinda becomes a national disgrace. Scorned as Broken, she turns to Demian for help getting revenge on the man who ruined her: the radical Malachi.

But the seeds of Malachi’s murderous plans lie buried in Belinda’s past, in the dark days of her kidnapping—a period of which she has no memory. And Demian may hold the key to recovering all that she’s lost—and saving the worlds.

Want to read more? Pick up your copy of In Truth & Ashes (Otherselves, #3) today!

Happy Book Birthday to In Truth & Ashes by Nicole Luiken!

Share Your Thoughts on this Excerpt from Haven for a Chance to Win! When Rain turned back to Freddie…