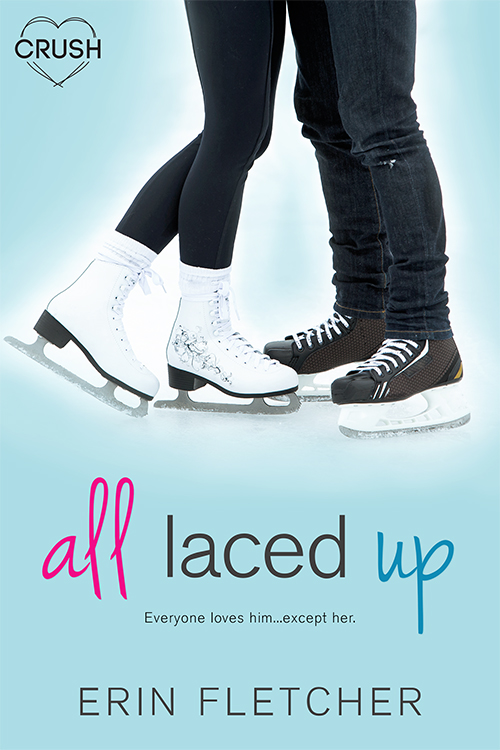 Welcome to Swoon Sunday where you get to meet some of our swoon-worthy heroes.  Today we have a visit from Pierce Miller from All Laced Up by Erin Fletcher!

Pierce, why don’t you describe yourself to us.

I’m about half an inch shy of six feet tall. I have hazel eyes and light brown hair that kinda curls at the ends when it gets too long. When I’m not wearing my hockey jerseys, I’m usually in jeans and a button-down or polo shirt.

I’ve been playing hockey since I could walk, and I’m one of the starting players for USA Hockey’s National Team Development Program. Most of my life is spent putting the puck in the net.

I wish my younger brother Carson didn’t have sensory processing disorder. He gets so overwhelmed by sounds and smells and feelings. Life is so much harder for him than it needs to be. He’s a great kid, and I wish I could take those struggles away from him.

A brownie hot fudge sundae with all of the toppings. I don’t eat dessert often, but when I do, I devour a brownie sundae the size of my face.

If she didn’t know how to ice skate, I’d love to teach her, because there’s nothing more fun than being on the ice. But I’d also like her to teach me something she’s good at. To get to be part of her world and have fun trying something new.

Skinny dipping in Lake Michigan in January. Mistakes were made. A bet was lost. I almost got hypothermia. But it was still one of the most fun nights with the team that I can remember.

Night owl. If I had it my way, I’d never have to be awake before noon.

The Detroit Red Wings. Since I’m from Michigan, it’s a natural choice. But even if I were from somewhere else I think I’d still pick them. So many amazing players. Such a great franchise.

Liked the Interview with Pierce? Now check out a swoony excerpt from the book featuring a conversation between Pierce and Lia:

He leaned in a little closer. “You don’t have a boyfriend, do you?”

I frantically shook my head. Probably a little too frantically. “No. Not at all.”

“Good.” He reached up and tucked a strand of hair that had fallen from my bun behind my ear. “Because I wouldn’t want there to be any reason I couldn’t do this.”

He leaned in, I closed my eyes, and he kissed me, soft and sweet at first. Testing. Exploring. But then I leaned in closer, and soft and sweet was replaced with intensity that stole the air from my lungs, from the car, from the entire world.

Want to Read More? Pre-order All Laced Up Today!

Teaser Tuesday: All Laced Up by Erin Fletcher

Happy Book Birthday to All Laced Up by Erin Fletcher!

Let us know what you think of the cover for Project Pandora by Aden Polydoros, which releases August…

About the book: Ruby Davis has a crush on her brother’s best friend. At least, he was his bestie unt…