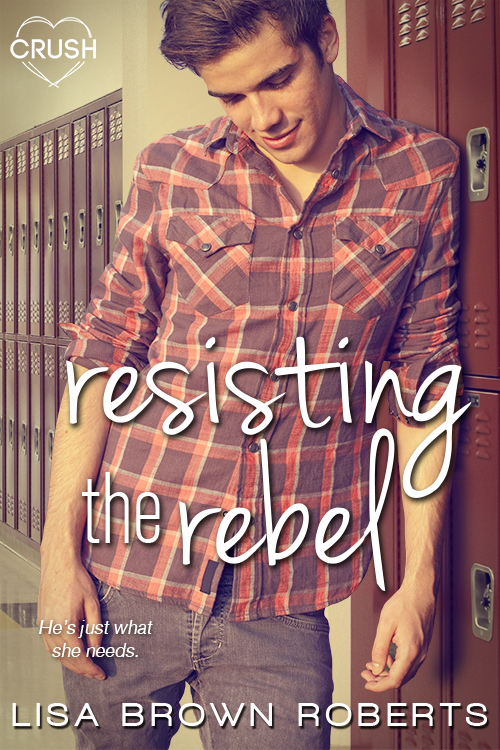 Welcome to Swoon Sunday where you get to meet some of our swoon-worthy heroes.  Today we have a visit from Caleb Torrs from Resisting the Rebel by Lisa Brown Roberts!

Loud, screaming stuff that pisses off my dad. But also classical, though no one knows that. And unfortunately disco too, because of Mandy, this annoying girl who’s pretending to be my fake girlfriend.

Kissing. Ask any of my ex-girlfriends.

To be a famous author. And not to follow anyone else’s rules.

Rebel Without a Cause. Obviously.

I hate sports. But I like cheerleaders. One, in particular.

Funny- Mandy and I just argued about this. I say black liquorice. She says rainbow sherbet, but she’s wrong. That’s her flavour, not mine.

This over-the-top, publicly humiliating thing I did for Mandy that I will never live down. But it was worth it, since it made her happy.

Liked the interview with Caleb? Then check out this his fake boyfriend proposition to Mandy:

Mandy stared out the window as Caleb drove too fast. “You’re speeding.”

“Thank you, Captain Obvious.” But he slowed down. A little.

He shot her a glare. “Not your crappy disco. Anything but that.”

She leaned against the headrest and closed her eyes. She couldn’t wait to get home. She still had leftover ice cream. And M&M’s. And Ryan Gosling.

He cleared his throat, and her body tensed at the gravelly sound. She couldn’t believe she was trapped with the demon chauffeur again, but it was better than taking the bus.

“So, you really want to go to homecoming with Gus, huh?”

Her eyes flew open. They’d stopped at a red light, and he glanced at her, his expression unreadable.

“Some guys are clueless, unless you throw it in their face.”

“Throw what in their face?”

The light turned green, and the car accelerated, along with her heart rate.

“Some guys only want what other guys have.”

“I don’t understand.” She had no idea what he was talking about, but something inside her zinged with nervous energy.

He sighed next to her, probably annoyed with her stupidity, since his brain was so big and all, and hers was skittering around like a kindergartner on crack.

“If you hook up with someone else, maybe Gus will notice you. The way you want him to.”

Her body flushed with heat. What was he suggesting?

“And how would I manage that?”

He sped up, shifting into third gear. “Find a fake boyfriend.”

“What?!” She screeched so loudly she even scared herself. Caleb swore and swerved, then shot her a glare.

“Damn it, Disco. Calm the hell down.”

She leaned forward, straining against her seat belt. “That’s a horrible idea. I hate lies. And besides, even if I wanted to do it, where would I find a fake boyfriend? J.T.’s gay, and he’s the only guy I’d trust enough to—”

“You’re not gonna marry the guy. It’s a business arrangement. You’d both know it’s fake. You only do it until Gus asks you to the dance, then it’s over.”

They’d arrived at her house. He parked and turned to look at her, and she caught her breath. He was…hard to look away from, that was for sure.

“Thanks for your, uh, suggestion, Caleb, but no way is that happening.”

“You’d probably only have to fake it for two weeks. Three, max, if Gus is a total loser and doesn’t ask you ’til the last minute.”

She sighed. Why was he so insistent? “It’s not happening. Anyway, who would I ever convince to do that for me?”

He studied her, his intense gaze unnerving her, then his low voice said one simple word. “Me.”

Welcome to day 3 of The Foxglove Killings Murder Mystery Event.  Do you have a guess who the culprit…

Dear Chantele, You’re fifteen and it’s the second week of your sophomore year of high school, which …