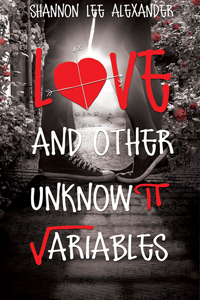 Love and Other Unknown Variables releases in just a few more weeks on October 7, 2014.  Here’s a sneak peek inside the book.  Come back each week for a new excerpt or teaser until release day!

Results from my personal experimentation in this realm would suggest pop culture is stupid. Or it could be that my methodology is flawed. When an experiment’s results are unexpected, the scientist must go back and look at the methods to determine the point at which an error occurred. I’m pretty sure I’m the error in each failed attempt at getting a girl’s attention. Scientifically, I should have removed my- self from the equation, but instead, I kept changing the girl.

Each experiment has led to similar conclusions.

Method: Hold her hand under the table during

Result: Punched in the thigh.

Method: Yawn and extend arm over her shoulder during Honor Roll Movie Night,

Result: Elbowed in the gut.

Method: Kiss her after exiting the bus,

Result: Kneed in the balls.

After Maria, I decided my scientific genius was needed for other, better, experiments. Experiments that would write me a first-class ticket to MIT.

I’m tall and ropey with sandy blond hair so fine it’s like dandelion fluff—the kind of dork that no amount of pop culture can help. Which is how I already know how this experiment will end, even as my hand reaches out to touch the girl standing in front of me at Krispy Kreme donuts.

There was a long line when I walked in this morning, so I’d been passing the time by counting the ceiling tiles (320) and figuring the ratio of large cups to small cups stacked next to the coffee (3:2). I’d been counting the donuts in the racks (>480) when I noticed the small tattoo on the neck of the girl in front of me.

It’s a symbol—infinity. There’s a cursive word included in the bottom of one of the loops, but I can’t read it because one of the girl’s short curls is in the way.

Before I realize what I’m doing, I sweep away the hair at the nape of her neck. She shudders and spins around so fast that my hand is still midair. Flames of embarrassment lick at my earlobes, and I wonder if I should be shielding my man parts from inevitable physical brutality.

“What’s your problem?” Her hand cups her neck, covering the tattoo. Her pale skin flushes and her pupils are black holes in the middle of wild blue seas, but since I’m not coughing up my nuts, I’m already doing better with this girl than any before.

Posted in: Around the Web, Books, Everything ElseTagged: Love and Other Unknown Variables, Shannon Lee Alexander
Previous

The Book of Ivy by Amy Engel Sneak Peek

Summer is almost here and that means more time to dive into some great reads. Here are some of the b…