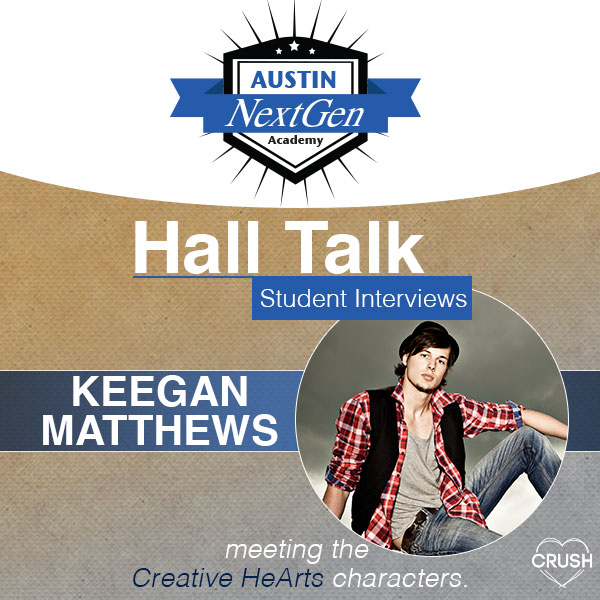 Height: Not sure, but definitely on the tall side

He’s a talented wood sculptor, though Keegan calls it whittling. He also is the only student at Austin NextGen Academy who doesn’t plan to study or work in one of the arts after high school.

What is one thing that nobody else knows about you?

I can quote every single John Hughes film pretty much word for word.

Keegan: “Screws fall out all the time. The world is an imperfect place.”

Dahlia: How about from Ferris Bueller’s Day Off?

Keegan: “Not that I condone fascism, or any other -ism for that matter. -Ism’s in my opinion are not good. A person should not believe in an -ism, he should believe in himself.”

Dahlia: Seriously? You just pulled that line out of thin air?

Keegan: I told you. Every movie. Memorized. Every. Movie.

What was your first thought when I suggested helping you with Operation Dream Girl?

It actually went back and forth between being disappointed that you wanted to set me up with someone else and being excited I had an excuse to spend time with you. And, also, you were wearing that halter shirt thing and I kept thinking about how great it would be if the bow tied at the back of your neck came undone…

You’re a talented sculptor of wood (yes, I know you just call it whittling), so why is it that you’re the only student at Austin NextGen who is planning to study marketing in college, not one of the arts?

Life is unpredictable and I feel like I want a little more security than a life as an artist would bring me.  I mean, one day my dad was super healthy and the next day he had stage four cancer and our whole lives were turned upside down. I know most people would say that should make me want to follow my dreams, make me want to go big or go home since life is precious and can be taken from me at any second. But I don’t get what’s so great about struggling to eke out a living as a starving artist when there are perfectly good jobs in marketing and advertising that let me use my creativity, but also pay the bills. There’s nothing wrong with thinking ahead, even if most of my friends think I’m nuts.

What is your favorite Beatles song? (And yes, this may be part of my compatibility test…for you.)

Honestly, I’m an early Beatles kind of guy. I love the fun sounds of “I Want to Hold Your Hand” and “I’ve Just Seen a Face.”  But my favorite is probably “With a Little Help From My Friends” …so, how’d I do? Are we compatible?

Dahlia: I’m a “Let it Be” and “Lucy in the Sky with Diamonds” kind of girl, but since you mentioned “With a Little Help From My Friends,” I think I can let it slide…

Now that you know my secret, what is one thing that you hope I’m able to learn or experience during my one year as a “normal” girl?

What it’s like to be loved for who you really are, not for what you can do for someone.

One of the things that I’ve noticed about you is that you seem to be friends with everybody at NextGen, not that I’m surprised because your popularity hasn’t seemed to go to your head. Have you always been the guy that everybody looked to at NextGen?

I never really think of myself as popular. I just like people, you know? Like hearing their stories, like getting to know who they are and what makes them tick.  And I try to help out where I can, you know? What’s the point of being friends with someone if you’re only there when things are going good? If someone I know has a problem, I’m going to try to help them fix it. It just seems like the right thing to do.

Even though you seem to be friends with everybody at NextGen, I’m not sure who your best friend is. Is it Jacen? (I’m guessing because you were talking to him about your Dream Girl at the dance.) How did you meet him?

Jacen is definitely my best friend. We’ve been friends so long, I don’t even remember how we met. He’s just always been there. I guess he was really worried that we wouldn’t be friends anymore once he came out, but I don’t get that. He’s the same person he always was. Why do I care who he loves as long as it’s someone who treats him right?

I’m new to Austin and NextGen. What are your top 10 recommendations of places I should see during my senior year?

What is one thing that scares you?

Check out this short, swoony teaser from Tracy Deebs’ The Secret Life of a Dream Girl:

Three hours – and twenty-five calculus problems later – and he was still thinking about Dahlia and how to clue her in to the fact that she was Dream Girl to him. And all of her advice and antics today only made her more perfect in his eyes, not less. He liked how inventive she was, how willing to help him come up with the perfect plan. Plus she made him laugh, which he loved.

Maybe he was looking at this the wrong way. Maybe instead of being bummed about her plan, he should be happy about it. After all, it had gotten him her phone number and a lunch date with her, which was more than he would have had otherwise…

So the trick was to use tomorrow’s lunch date to get another date and the phone number to keep her thinking about him, especially late at night like the article mentioned. When she was in bed. And warm. And a little sleepy. And in skimpy pajamas. And –

He groaned again, then shut that line of thought down before it got out of control.

Reaching for his phone, he pulled up the two measly messages between him and Dahlia. He spent a minute trying to figure out what to send her, then on impulse, he downloaded “Crush” by Dave Matthews Band and hit send. He wasn’t sure how she’d take it, whether she’d think he’d chosen it for her or because he had a crush on someone else, but that was okay. For now, he liked the ambiguity of it. And that – he hoped – would get her thinking about him. And sex. And –

His phone vibrated with an incoming text, and he all but dropped the thing in his haste to pull up his messages.

Dahlia had responded with a link of her own and he grinned like an idiot as he pressed play. A few seconds in he started laughing, because she’d sent back “With a Little Help from My Friends” by the Beatles.

Was it any wonder he was crazy about this girl?

He thought about how good she’d felt on his lap in the cafeteria at lunch. About how much he liked her smile and her laugh. About how quick-witted she was, and how eager to help.

No, it was no surprise at all that he’d fallen for her. And now it was late and she was probably in bed and thinking about him at least a little bit. Whoever had written that last advice column obviously knew what they were talking about…

Now if only he could figure out how he could use this situation to take her from thinking about him to being crazy about him, too… 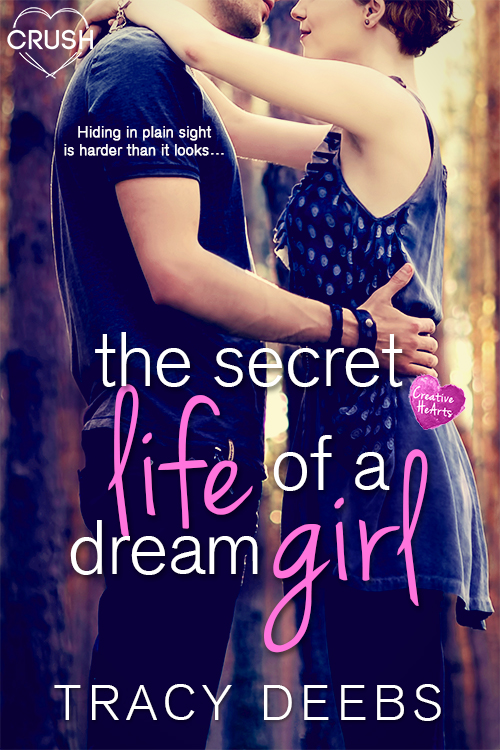 Happy Book Birthday Day to The Secret Life of a Dream Girl!

We are so excited to share these new releases today! About the book: Dating isn’t easy when yo…