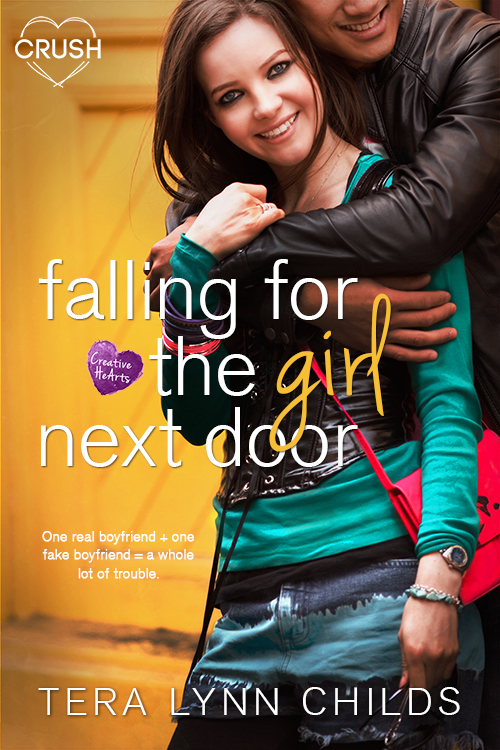 Don’t miss today’s Teaser Tuesday from Falling for the Girl Next Door (Creative HeArts, #5; Sloane and Tru, #2) by Tera Lynn Childs, which releases on Monday, November 14, 2016!

A few months ago, if someone asked me to name one good thing about Austin, Texas, I would have laughed in their face. Serious, can’t control it, gut-wrenching laughter. Never in a million years.

Apparently a lot can change in a short time, because now I can name three.

So there it is. The three reasons why I’m not unequivocally hating my parent-enforced exile in the Lone Star state. Enough to make my sentence here more than bearable. Dare I even say enjoyable? I’m not saying I’m ready to apply for permanent Texas citizenship, but sticking it out here in weirdsville for the duration of my senior year won’t be the worst thing in the world.

Cue the guilt. I feel like I’m cheating on my hometown with another city. A girl can’t spend almost eighteen years as a New Yorker and then just walk away. But Austin makes me want to try.

There’s also the family guilt. While Mom and I are living it up in Austin, Dad and Dylan are back in our Big Apple brownstone. Dad is a workaholic who is almost never home. It’s kind of hard to miss him when I never saw him much anyway. But my baby brother is another story. He’s like the missing puzzle piece in my daily grind. I know Mom feels it, too.

The guilt was bad enough when I could blame my parents for sending Mom and me away. It was me against them. I was the sane one who wanted to go home.

Now that I’m actually content to stay in Austin…now it’s kind of my fault, too.

My family is broken in two, with half a country separating us. And I’m partly to blame.

We can hardly contain our excitement! We have the official teaser trailer for Deviate by Tracy Clark…

Let us know what you think of the cover for Summoner by S.D. Grimm, which releases September 4, 2017…