Welcome to Swoon Sunday where you get to meet some of our swoon-worthy heroes.  Today we have a visit from Guster James Lowry from Nexis by A.L. Davroe!

Guster, why don’t you describe yourself to us?

I’m 6’1” with a medium build. Like most Naturals, I have dark hair, dark eyes, and tanskin. I have a fox tattoo on my left arm, and I like to dress in functional dark clothes.

In the game? I’m a thief, a quester, and a lover *wink.* In Real World? Well, I do a lot of things… I don’t like to talk about Real World, so let’s just say that I’m a Manager with some training as an Engineer, and I don’t really like it much.

In Nexis, my home base is a little cottage just outside of Garibal. In Real World, I live inside of Evanescence, one of the domed cities. But, I could live anywhere, really. It’s the people that make a place home, so as long as I have those I love around me, it’s home to me.

I love all sorts of pre-Bio-Nuclear War music. I think my favorite is this disc thing that Zane brought back from The Waste and had de-crypted. It was a collection of songs by Frank Sinatra. His songs just get stuck in your head and I find myself humming them all the time. That song, “My Way?” I want to live my life like that. I think that would be my theme song if I had one.

I want to live freely, being who I am and living with who I want without any expectations or restrictions.

A long ride on my vivacycle. Of course we’d stop for a nice meal — maybe a picnic somewhere nice and quiet where we could talk – and then I’d take my lady to her favorite shop and get her whatever she wanted (because she’s worth it and should have anything she wants). Perhaps after, we could stargaze for a while.

I love riding my vivacycle and playing with my dog, Dune.

I’m pretty sure shooting yourself qualifies as crazy. Then again, so does fighting a fire breathing dragon…

I know it sounds kind of strange, but I’ve always sort of idolized Ella’s dad. He has his faults, sure, but he always stayed true to what he believed. He stuck to his guns despite the obstacles, was unabashedly himself despite it coming off as quirky, and he loved and accepted the woman he married despite her being a complete social outcast. To me, he was an incredibly brave genius.

I spend hours at a time staring at the paintings in the Cyr family gallery. My favorite is this huge piece that hangs in the corner. I don’t know anything about it other than it was painted by someone named Greydon Parrish. It’s a little scary and makes me wonder what it’s supposed to mean, yet it’s such a powerful image that I can’t help staring at it every time I walk in the room.

Thank you so much for joining us, Guster! Now, here’s a super swoony excerpt from Nexis for our readers…

He’s staring at me, his eyes twinkling in the darkness. In the next moment, he smoothes his fingers along my brow, brushing hair from my face, and smiles a soft, contemplative smile that makes my squirms turn from the outside in.

I take a deep breath, trying to center myself and focus on something other than the light feeling he gives me. “Why do you smile so much?”

“I’m happy,” he says, shifting so that he can rest his weight on one elbow. “I like it here.”

His bottom lip disappears into his mouth, canceling his smile as his brow furrows in thought. “Do you run as much out there?”

“What?” I say with an exhaled laugh.

“You like running. You run when you don’t need to, just to run.”

I look off to the side, avoiding his eyes. I could say that I like running because I now have legs to run on, but it goes deeper than that. “Running here,” I whisper, not quite knowing what I’m saying, “It’s not like being on the treadmills at home. It’s different.” I shake my head, feeling stupid. “I don’t know, it’s like I’m more alive here, bursting with energy. I used to hate running; it used to be a chore. It’s not like that here. I get tired and I can’t breathe, but it’s a good tired breathlessness.” I look back at him. “I guess that sounds sort of silly.”

His smile returns. “I’m not sure I could explain it any better myself.” Dark eyes wander out and over the landscape, drinking in the sky and the land. “Every time I come here, it’s like being reborn. And, no matter how bad it gets here, I know there are more ways to solve my problems here than there are out there. The world is still alive here, people have potential, you’re still allowed to dream.”

Unable to help myself, I reach up and touch his face, drawing his attention back to me. “What do you dream of?”

His fingers twitch at my temple. “I dream of a lot of things,” he admits, his fingers wandering through my curls. “I can imagine endless possibilities, have infinite wants.”

I feel my cheeks warm as I say, “Do you want to know what I want right now?”

I hold my breath for a long moment before exhaling. “I want you to kiss me again.”

Guster’s eyes widen, as if this request surprises him. I can’t imagine why it should, I don’t feel as though I’ve hidden my attraction to him, but then his expression deepens into something soft and affectionate. When he does lean in to kiss me, it’s long and hot, his firm lips smiling even as they travel along my jaw and down my neck. The intense feelings his attention arouses in me makes me sweat despite the cool night air, make me want to jump up and run again despite how much I want to stay where I am. I want more than just a kiss. I want so much more from this boy. It scares me and it thrills me and, because I can’t have anything in Real World, I want it all here—damned be the consequences. He doesn’t stop until something close to my ear beeps in urgency.

Breathing heavy, he lifts his face and glances down at his wrist. He lets out an annoyed growl and runs his hand through his dark hair. “Final health bar.”

I blink, not entirely in the moment. My mind and body feel stretched too tight—tight to bursting. “What does that mean?”

He rolls off of me and gets to his feet. “I have to sleep. We can do this another time.”

I give him a disappointed pout.

He smiles and offers me his hand. “Trust me. There’s going to be another time.”

I lift a coy brow as I put my hand in his. “Who says I want another one?”

He hauls me to unsteady feet, pulling me close once more. “Keep running, Elle,” he whispers in my ear. “I’ll always catch you.” 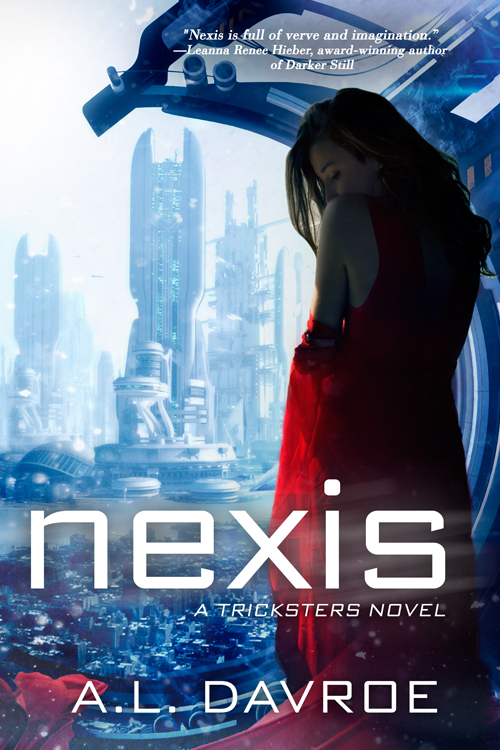 But Nexis isn’t quite the game everyone thinks it is.

Capture The Fantasy: Atlantis Rising is $0.99 for a limited time!

Happy Release Day to Gloria Craw! About the book: We’ve stayed hidden too long… I am different. I ha…

My assignment was to write a letter to my teen self about bullying, but I’m no good at writing lette…