Check out the official trailer for Naked by Stacey Trombley, releasing 7/7/2015!

Except that for the first time, I have a chance to start over. Not just with my parents but at school. Still, the rumors follow me everywhere. Down the hall. In classes. And the only hope can see is in the wide, brightly lit smile of Jackson, the boy next door. So I lie to him. I lie to protect him from my past. I lie so that I don’t have to be The Girl Who Went Bad. 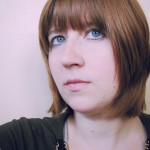 Stacey Trombley lives in Ohio with her husband and the sweetest Rottweiler you’ll ever meet. She thinks people are fascinating and any chance she has she’s off doing or learning something new. She went on her first mission trip to Haiti at age twelve and is still dying to go back. Her “places to travel” list is almost as long as her “books to read” list.

We ❤️ all the #Bookstagram photos. We spend hours just staring at all the beautiful books. So we tho…

The Vampire Diaries is coming to an end. There. We said it. While we still can’t proces…